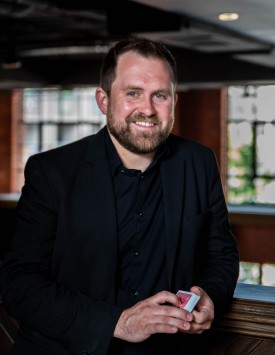 Brandon K Parker has been performing magic professionally since 2008. Originally a close-up performer, Brandon focused on sleight of hand card magic, but quickly expanded his style and repertoire as he began performing for larger audiences. He studied civil engineering at Louisiana Tech and performed at multiple student events as well as around the community. Since moving to Boulder, Colorado in 2009 he began performing regularly around the greater Denver area, entertaining Colorado with charm, wit, and magic. Parker completed his Master’s Degree in Structural Engineering in 2013, but chose to pursue a career in magic rather than engineering. Since living in Denver, he has performed at dozens of restaurants, bars, and entertainment venues including Elitch Gardens, Little Man Ice Cream, and CB & Potts. Outside of his public performances, Parker performs for clients at corporate events, trade shows, dinner parties, and much more.

By carefully considering the audience and occasion, Parker tailors a custom show for each client that suits their specific needs. Whether it’s an intimate dinner party or a large corporate event, Brandon will work to make the performance memorable and unique. No two shows are the same!